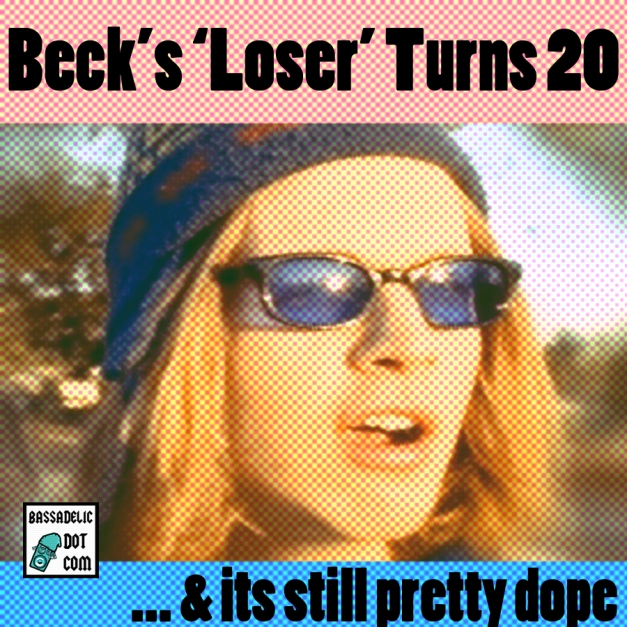 This March marks the 20th anniversary of when this funky ‘n futuristic anarchistic pop gem was first released:

Yes, this gem of a jam seems to have proven itself throughout the last couple decades, outlasting pretty much any other 90s song you can think of. It still has a freshness to it, and I think a lot of that can be understood with a twofold explanation…

For one thing, it really is singular; there wasn’t anything else out there quite like it, with its forward-thinking fuckery and random audio samples mixed with a chorus line about sucking at life, along with an unprecedented flow in rap lyricism at the time (the ambiguously sarcastic/ironic/lazy-sounding Generation X sound of his verses).

The second thing to think about, when considering how it has managed to stand the test of time, is in the fact that almost no artists since Beck have really strived for true originality in music the way he has. And he has again and again and again.

MTV and Rolling Stone and all the other Rock-Music-Narrative-Creators always try and shove a notion down everyone’s throats that Kurt Cobain WAS the 90s rock icon to pay attention to. True, Nirvana was incredibly important, and helped break the Seattle rock sound to a national audience. Plus, Nirvana made some damn catchy and provacative tunes, and I’m not arguing against that – but one thing that is often forgot about Cobain was that people were starting to get REALLY sick of his egotistical cranky heroin-addict bullshit right before he died and became a rock martyr. If he hadn’t died when he did, people likely would’ve moved away from Nirvana anyway. Well, suffice it to say, as far as originals in 90s mainstream music go, that story was definitely NOT the case for Beck.

Beck continued to reinvent himself time and time again, with a tongue-in-cheek humor about himself, and about music in general – and one of the most endearing things to consider about Beck’s musical diversity (and, for fuck’s sake, its REAL hard to argue against his musical diversity when you consider the fact that he had 3 minute songs that jumped from jazz to hip hop to metal to country, all with an efficiently-acidy cut-up mastery that would’ve made the Beatles jealous and throw away their White Album out of fear of it being considered mediocre) was the fact that Beck was DAMN good at every genre and instrument and style of music he played. He didn’t just pay someone to play a saxaphone – he knew how to play that shit, himself!

It was the perfect combination of technical musical mastery, thoughtful artistic originality, and a well concocted, “I probably don’t give a fuck,” attitude that made his music truly one-of-a-kind, impossible to emulate, as well as perfect for the time period.

An important influence in Beck’s music that isn’t always considered (well, it is vaguely considered, but not often outright ) is the influence his grandfather, a dadaist artist, likely had on him. As stated in the first paragraph, Beck made a kind of anarchist pop music, and I mean that in a very real sense, as dada art was, at it’s time, a very rebellious and “fuck the art establishment, here’s a picture of a toilet,” type of affair. Beck’s schizophrenic musical structures and playfully-bored-aesthetic set the stage for a decade of experimental pop music. And when I say ‘playfully-bored,’ a good example is the track, “MTV Makes me Wanna Smoke Crack,” where, halfway through the song, you can hear Beck getting tired of the tune he’s playing, and then, out of nowhere, the song launches into a coffee-house jazz rendition of itself, for no reason at all, complete with upbeat crooning about ‘getting all uptight,’ and ‘smoking crack.’

Half the lyrics don’t mean a damn thing; and for whatever reason (maybe as a sheer reaction to the overly-serious rock ballads of the time?) it just feels so refreshing, hilarious and Zappa-esque that listening to it only once just doesn’t cut it.

Though he cultivated an image of radical freeform slacker-ish-ness in his early work, I suspect it was also carefully, consciously, and meticulously designed that way. Beck has stated that ‘Loser’ was actually a joke – but damn, wouldn’t you love to make a joke track that was THAT good, and blew up as much as it did?

In other words, the dude’s a genius.