Bassadelic is on the road……

Posted by StrangeFlow on September 18, 2014
Posted in: Articles. Leave a comment 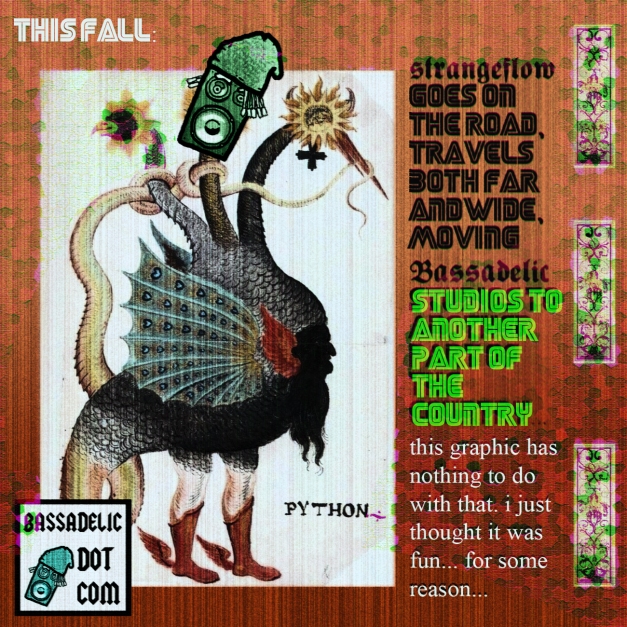 Yes, it’s true. Travelling from deep in the heart of the upper Midwest, that stankin mitten known as Michigan….to Washington State, where a majority of this website really got going..

Got a lot of things planned, actually. I’ll let you know as soon as I get things up and runnin soon, and as soon as I find a place. Focusing on the Olympia, Washington. We’ll see!!

You know something interesting tends to happen around the times that I’ve moved… I often discover new forms of music right before I travel.. When i left for Washington a couple years ago, I started noticing electro swing and trap music… Before that, one of the times I moved fromo California, I had just gotten into some of the Dilla-esque electronic hip hop stuff.. De bruit, Mike Slott, stuff like that… Then when I came back to Michigan a year or so ago, it was fuckin jungle footwork… Now? Well, yea, I’ve stumbled across a formula for making electronic music that is (and I don’t mean to oversell this here) the most insanely hardcore hardcore music I’ve heard in AWHILE… Before I even finished the first track (AND I HAVEN’T EVEN FUCKIN ADDED BASS TO IT YET) I knew it was kind of a gem… I’ll show you guys as soon as the next 5ifty$ix K release comes out… But it’ uh, well, it’s something that’s more exciting than anything I’ve done in awhile.. I’ll leave it at that..

So anyway, thanks for reading my rant about random shit / travelling / the future of the site… To reward you, here are a dozen pretty women wearing yoga pants… The photo was taken at the going-away party for Bassadelic last tuesday..

Ok.. So… MAYYYBE this last image wasn’t actually a photograph I took … MAAAYYBE I just downloaded it off the interwebz a year ago or something.. Eh, so what. I posts what I wants..

Rob Huckle’s Free Track Thursday Ends – So get all the tracks now for free! #DredCollective

UPDATE: here’s one big RAR file to download all of the trax: http://www.mediafire.com/download/gd3fj60ox3wz23u/Dred_Collective_-_Free_Track_Thursday_-_Full.rar (all you gotta do is DL it and then use a program like WinRAR or MacRAR to get the thing open.. but it won’t be available for a long time, so I hear, so you better get it soon :) 177 free future bass-heavy trax! )

Rob Huckle, the man who single-handedly built Dred Collective, and now ItalDred, has been putting out free electronic and bass tracks every week under the Free Track Thursday banner. But, unfortunately, all awesome things come to a close sooner or later, so for now, the awesome Dred Collective free weekly trax stint is over. BUT – you can download all the tracks from the link Rob posted here. Yep, ALL the trax are there.

Here is the whole Dred Collective free track thursday series, i realise you need to have a pro account to download the whole thing so will be re-uploading as a zip tomorrow night when i get home…. for now pick and choose tracks as you please footwork…juke…jungle…dnb…techno..garage..house..rave etc, go effin wild

So, I’ll make sure to post an update as soon as that ZIP file comes in.

Rob’s had a good ear to the ground for some time, promoting all sorts of tunes, including a lot of the newer footwork jungle sounds, as well the new rave-revival / ’92-era style of music. In fact, I’d say he was definitely a contributor in helping the old skool 90s rave sound start to come back into popularity. So kudos for that one, Rob!!

The dude was also kind enough to play some of my 5ifty$ix K trax out, as well! But you know, now that I’m typing all of this, I realize it sounds like some kind of weird funeral post, but in reality, the DYNASTY of Rob’s musical ambition is only just getting started, really – Dred Collective is still up, as is the new label, Ital Dred.

I recommend keeping a tab on https://soundcloud.com/dredcollective, because there’s always some new stuff up there. Also, if you’re a fan of Rob Huckle’s empire of music, definitely check out his new Italred Records. You can also hit him up on Facebook and all those sites, too.

AND BTW there are fuckin HUNDREDS of tunes, from KidLogic to redHat to Skubi to Mark Kloud to Melt Unit to Machine Girl… So, basically, a lot of the underground pioneers…