How Rolling Stone Fell Out of Relevancy

This is an article about a dinosaur.

Rolling Stone Magazine recently had an issue about “all the newest club” music sweeping the nation, including Skrillex, Deadmau5, and Bassnectar.

Now, although I have nothing against a mainstream music magazine covering ANY of those musicians, I just gotta ask: why now? Why the fuck, now?

Oh, because Hollywood started putting dubstep and electro music in some of their action movie trailers – so, clearly, it’s relevant to talk about that music now? What about Glitch Mob? They should’ve had a cover story, and it should’ve been four years ago! What about iLL.Gates? Do you even know who that guy is, Rolling Stone? You should!

Now, credit where credit’s due: Rolling Stone has some very decent political articles (especially from your best writer, Matt Taibi!) but as far as your music articles go, you’re stuck on an outdated music narrative from decades ago, where, as far as you’re concerned, the best days in music glory are likely behind us – as you jerk off top ten lists of “best new albums of 2012,” and cite no hip hop or electronic music, but instead have SOME decent new rock, as well Neil Young and Bruce Springsteen – ah, Bruce Springsteen!

You can almost see the magazine having a prolonged wet dream about The Boss as they cite his every (“relevant?”) move in the world of pop culture and music.

Now this is NOT an article designed to bitch about Springsteen. In fact, I don’t really hate his music, I think he’s a talented guy.  But if he’s REALLY at “the top of his career,” let me ask you, readers, what’s his latest single called? Give up? Me too, I don’t know, and I bet most people don’t know… (But I bet Rolling Stone does!)

Oh, and U2. Why, oh, why, does U2 continue be on the radar off all these big music magazines. If Bono is relevant for his work in Africa, alright, then talk about that – but I’d say that’s a little different than his work in a band most people haven’t cared about in ten or twenty years… and ACDC. Please, just stop talking about them. No one really gives a damn if they have new music. It sounds the same as all their old music, and why do they get press for it? There’s a million groups and artists who deserve recognition over those jackasses.

The point is, they’re appealing to the Triple-B’s: their Baby-Boomer-Base. They’re trying really hard to pretend like all the rock from the golden years is STILL what we should be paying attention to, as much as we should be paying attention to anything else that’s “new” in music… And, again, I’ll give them a LITTLE credit: they do have some articles about some of the new rock that’s come out (because Rolling Stone LOVES to rant about any new rock sub-genre in existence, as it helps validate their musical narrative, the narrative that proclaims that ‘every ten years, there will be a new rock revolution’) but you know what? There’s a lot more going on. Way more.

And no, I don’t expect them to do a cover story on all the new and incredible WONKY tunes…. (they should’ve done that two years ago) but just NOW coming to terms with “EDM” music, as if it JUST showed up, and blew away all your old Van Halen tunes that you’ve been overplaying for years? What are you, Rolling Stone, a frat house? Even most frat houses have been playing dubstep (or, what some folks might refer to as ‘brostep,’ – but I’m not even getting into THAT, as I’d completely you lose you, then!) for a decent amount of time. Not to mention all the fine glitch hop that’s been coming out… or, how about moombah? It’s somewhat popular now. Have you done anything more than a tiny little paragraph dedicated to “other” music for moombah? Have you even done that? …or did you just put it under some “DJ’s To Watch,” section, (or, you know, whatever BS “let’s get the ravers to read this, too”- themed subsections that mainstream music magazines love to throw in there on a whim, as an afterthought)

For god damn’s sake, dubstep is peaking, and many are talking about the “after-dubstep” time period now… In England, they’ve been at THAT point for awhile, now!  Where were you, RS? Pretending you mattered? Isolated in your own little arrogant and stubborn world of rock glory that you ignored the world around you? Do you even have the internet? What’s next, a cover story on nyan cat? I wouldn’t be surprised. In fact, I kind of expect it… It would look something like this:

“Nyan Cat: How ‘Memes’ are Sweeping the Nation! But Have They Gone Too Far?”

(Subtitle: When Will There Be a Springsteen Meme? Because THENWe’ll Take it Seriously… We’re All  Over 50.”)

And you might say, “gee whiz, if they want to talk about The Boss, why not just let them?”

Yes, it’s true, they can be as irrelevant about new music as they want, but if so, they need to stop acting like they give a damn about new culture and musical trends, and just say what they are, “a magazine about music that your parents might like,” instead of acting like they’re this counter-culture buzz-worthy hip-as-fuck magazine that ALWAYS knows what’s up.

They helped introduce the world to the Grateful Dead and Janis Joplin, nearly fifty years ago… But expecting something like that today? Ha, forget it! They don’t care what you think. They know they’ll sell magazines doing an issue entirely about the Beatles, or talking up Madonna (whom Deadmau5 rightfully told off) or sticking Britney Speares on the cover, again, like they love doing. I want to type FTL, but I’m sure RS won’t get it. 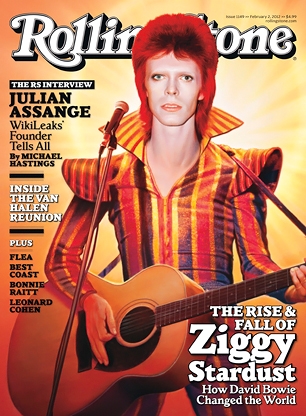 Rolling Stone and other giants of music journalism are one of the reasons it’s so hard for smaller sounds and musicians to get ahead. Why cover new music when you could rehash some story about any 60s legend? Well, I’m personally sick of hearing this notion – the notion that modern music lives in the shadow of the 60s or 70s (or occasionally 80s) music legends.

I’m sick of that over domineering attitude by the Big Music press to ignore a niche style of music until it starts to blow up – at which point, Big Music will see it, swallow it whole, and small music will have to start over. If they cared about new music, they would’ve done their homework, kept an ear to the ground, and talked up the new music trend when it actually started to become a new music trend in the first place!  Their current approach is whorish. Straight up whorish.

Not that they’re reading this, in their little cocoon on another, more tubular-and-rockified planet… Mine is a small blog. But you know what? I wonder if they even know what a blog is!

Yes, that’s a bit of sarcasm, but I’m completely sincere when I say: Rolling Stone, you’re a fucking dinosaur, buck up or quit.

(and in case it’s at all unclear, the graphic above is of a tombstone of Rolling Stone, but it’s a joke, I don’t actually want them to die, I just want them to change, and change a LOT..)

48 comments on “How Rolling Stone Fell Out of Relevancy”