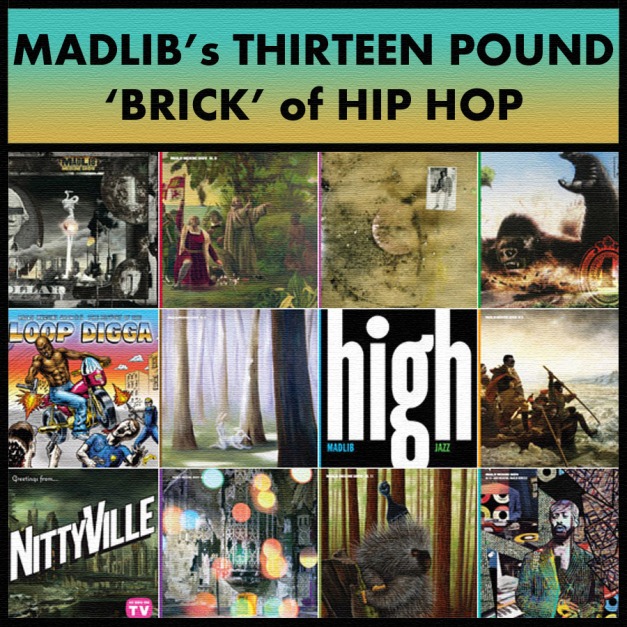 So, Madlib is one of my favorites, and has been, ever since I discovered him, a few years back.

First of all, his music has a very soulful and psychedelic aesthetic. I can put a bunch of Madlib tracks on a Winamp playlist, hit shuffle, smoke something nice, and just chill out for hours. Its always great to discover an artist who creates music that’s good for background ambience AS WELL AS intense and close listening – Madlib is one of those artists that’s perfect for that, and believe me, not all music is like that.

So anyway, enough about why Madlib is awesome. You might be sitting there, listening to me babble, saying, “Yea, Madlib is dope as hell, but what has he done for me lately?” Well, here’s something…

The Madlib Medicine Show – The Brick. It’s a series of thirteen discs of funky hip hop, mixed by Madlib…. Let me say that again: It’s a huge compilation, and it stretches the length of thirteen albums! Thirteen. To borrow a quote from the Beastie Boys tune, ‘Watcha’ Want,’ “You can’t front on that…”

“Years before this series was announced Madlib had talked about an idea to release an album a month. For this producer, whose work thrives on a freestyle cut & paste, sometimes blurring the lines between original work and DJ mixing, there was little time or patience for the normal marketing and promotion norms of the music industry. By the start of 2010, it was time to experiment.”

It’s incredible! Listening to this whole thing is such a diverse experience, musically. It’s an experience you can truly sink your teeth into – there’s the always-enjoyable breakbeat style you expect and love from Madlib; and of course, interesting samples and random vocals from all over the spectrum, all blended together in an expressive and entertaining way. It’s a breath-taking example of a truly prolific artistic mentality, of which I have an interesting theory on that I would like to share…

When an artist spends enough time on their craft, their skill, and their output, you can tell. They say if you practice something for ten thousand hours, you’re a master at it. Right? Beyond that point, the more music you put out, the more you give people the chance to truly understand your range.

I mean, if you play five notes, even if they’re five GREAT notes, they’re still just five notes. If you play five million notes, people really start to see where you’re coming from; they see inside your mind, as, at some point in the cosmic musical trip, you must be opening doors you didn’t think you’d be opening (because you can’t just open the first-and-most-obvious “5-note” doors…) and the listener gets to see deep within the your psyche. Doors open up to rooms you couldn’t have anticipated… There’s more than just this kitchen and this living room, see – there’s a secret tunnel over here, too… etc.

Or, at least, that’s my theory. But the point, in all of my musical rambling (of which I greatly enjoy doing) is that you will likely find something in this compilation of psychedelic, raw, jazzy, and entertainingly-schizophrenic hip hop arrangements that you enjoy. I call it a compilation, but that’s probably not even fair, as it’s a mixture of original as well as material you would consider being a DJ-set. Madlib blurs the lines, because he has no time for convention. 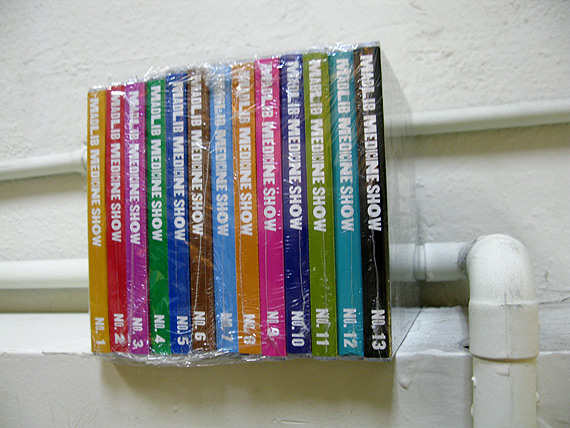 Ah, the photos of these thirteen CDs look majestic.

They are arranged into themes – for example, the second disc is, which is, “80-minutes of Brazilian psyche, folk and jazz,” and then there’s the fifth disc, containing, “Madlib’s early years, 1990-2000, from beat cassettes produced for local rap crew Crate Digga’s Palace.”

Check it out, it’s worth it.