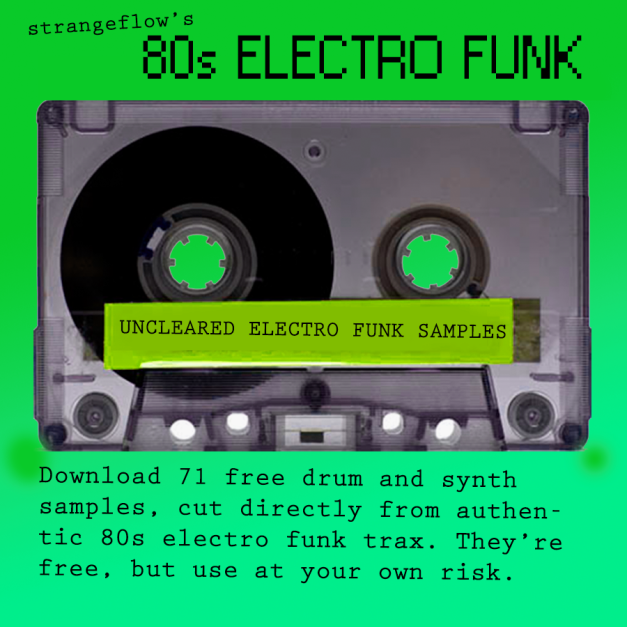 So, for a little while now, I was going through some old electro funk tunes, and having fun listening to the most electric-cowbell-friendly genre in existence… It was a lot of fun.. I definitely had some good ones. Gotta say, Debbie Deb’s ‘When I Hear Music’ is probably one of my favorites…

Just listen to those claps; that 1980s analogue subtractive synthesizer waver around; the vocoder compliment Deb’s lyrics so funkiliciouly, and those prominent rimshots, giving such a… such a great rimjob. I mean, uh… I mean, well… yea, a rimjob. I like music with prominent rimjobs.

Well, anyway, I decided to cut some samples from songs like these. It felt like a great resource. Maybe I could post em up online, too; and the world could get a taste of these clap-happy rimjobby cowbellish grooves.. (I really need to start proofreading…)

Anyway, long story short, my hard drive crashed. Fuckin crashed. I lost some good shit. I had backed up a lot of my hard drive a few weeks earlier, but lazily didn’t click on the ‘music folder’ to save it back it all up (FOR SOME IDIOTIC REASON) so I had no more electo funk masterpieces available on my hard drive.

So, about a week after I had taken steps towards putting my computer back in order ((I ALSO LOST HALF OF A BRAND NEW TRAP-BEATS SAMPLE PACK!!!)) I at some point felt the urge to get some of that funky electro rimjobby tunage up into my ears again (I hope that last sentence makes sense, somehow)… So I went out and attained some of those sweet funky grooves once again.

I think an inner funk wave hits me about once a year, and I think now is that season. So, as stated, I cut some samples from some of these classics, and I’d like to share them with you. Keep in mind, NONE of these are cleared for commercial use. So, technically, these are for educational purposes only. Therefor, you’re on your own as far as how you to choose to use these samples. Since I run a website, I can’t tell you to put them into your commercial releases, but I can say, “have fun and fuck around with em!”

I organized them into one-shots – kicks, snares, hats, etc, and there’s also a ‘synth’ folder, and a ‘whatever else,’ folder. They’re intended as one-shots, though there is one sample that extends a bit too long and you get to hear part of an old Tamil recording for a few extra seconds. I was going to go back and cut that early 80s Bollywood part out, but then I thought, “Well, damn this is a novelty, why not just keep it in?”

So, here, once more, is a series of files from the ‘StrangeFlow Goes Too Far’ folder: StrangeFlow’s Early 80s Electro Funk Samples.

ENJOY! And as always, happy mixin’ !!