The Best Tip For Staying Beyond Your Competition 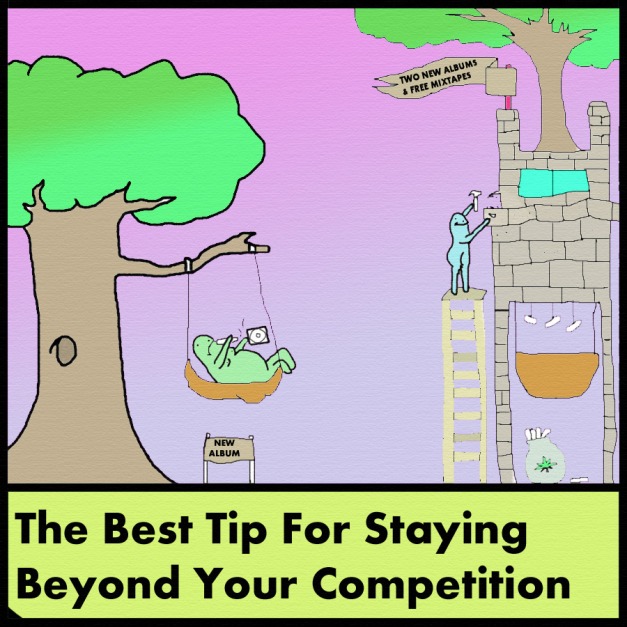 A QUICK NOTE: I have a friend (Simteks) who recently started a music production blog, and I want to make it clear, when I talk about competition in this article, I’m not talking about him. Just want to make that clear :) I don’t look at it that way, I look at it more like … me and him VS. the world… in this case, “the world,” being all the the other big-name music production blogs out there. So, there ya go…:D

To explain the graphic – there’s one dude in his hammock, smoking a blunt, with a new album. Woot. To the right, there’s a dude building a castle, selling twice as many albums, and giving away mixtapes, and he’s got TONS of blunts, and a WAY better hammock. Well, I guess the hammock isn’t THAT much nicer. Still…

Ok, so I know a lot of folks think you’re not supposed to want money for your music. You’re supposed to do it for the love of music, and not think about income, because if you even consider making a couple bucks, you’re a horrible corporate sell-out, and the indie police are gonna getcha!

If you’re someone with this mindset, then this article is NOT for you.

I love music, but I also do NOT live in my parent’s basement. My parents don’t cook me dinner or pay my rent. Also, I don’t split the rent six ways, living in a tiny townhouse with all my friends and their significant others… so, for all intensive purposes, I’m going to completely set aside the asinine assumption that the basic premise of ‘wanting to make a living through something you’re good at it,’ is, in any way, shape or form, anything other than completely desirable. You go back to working at Taco Bell for your living, and I’ll keep trying to earn my keep by utilizing my skills and talents, and we’ll both assume the other is wrong. Deal?

Ok, now that I got the haters out of the room, let’s talk real shit…

Here’s a tip that you can use in your craft, right now.

It’s something to contemplate, measure, contemplate some more, and then act upon. You will probably have to do some research for your personal line of work, but that’s ok – and I’ll explain why…

First of all, you might be a musician. Or, you might consider yourself a producer… or a promoter, or a writer, or an artist/graphic designer, or maybe you’re the hype-guy for someone else’s group. Whatever the case may be, you’re in competition with anyone else who’s in your line of work.

Just to clarify and reiterate, you do NOT have to hate other trap producers. That’s really not the point. In fact, I would encourage everyone to help everyone else out. Often, you’ll find that by being helpful to others, you’re also helping yourself. But back to the point…

Here’s one thing you should keep in mind – and this is the meat of the article – you have to get beyond the point of your competitor’s laziness.

Find out who your top competitor is, and find out what their working mode is. Find out how much time they put into their skill, their craft, their art, their beats, and go beyond it. Fuck, don’t just go beyond it, make a promise to yourself to try to double the amount of work they’re doing. Even if you come up just short of your goal of doubling up, you’re still, likely, far ahead of them, right?

So they write 15 twitter messages a day to promote their music and talk to people. Plan to write 30, and plan to make ‘em good.

So they write one album a year, and release a mixtape every two months… Your move? Drop two high-quality albums a year, and at least one dope mixtape every month. They plan to sell X? You sell X*2. You see where I’m going with this?

Maybe ‘laziness’ is not always the best term to use, as many producers do work hard, but in this case, it might help to look at the competition this way. Everyone stops somewhere, you dig?

So your competitor smokes 4 blunts a day and snort 6 lines of coke. Your move? Only smoke 2 blunts a day and only do 3 lines. ( I know the title graphic looks like the opposite, but that’s because he’s going for long-term-rewards… I’ll explain that in a minute) Ok, so this paragraph is sort of a joke. But my point is this: get half as high and work twice as hard. Work past the point of your competition’s laziness… Or, hell, since that getting high part is up to you, if you can work twice as hard AND get twice as high, more power to you… I’m just saying, make realistic goals – and prolific / ambitious goals.

I once knew a girl who would routinely smoke 8 blunts a day. I’d ask her how she was doing, and she always complained of being tired… Off topic, sorry.

So there it is, work past the point of your competitor’s laziness (AT LEAST) … beyond that, do your research and find out how much they’re willing to share with the public about their work efforts, and (if you’re up for it) commit yourself to working twice as hard as them. Try to blow them out of the fucking water. It’s a good mentality for anything, and not just music – though, this is a music blog, so clearly I’m focusing on that more than anything else.

How about their website? Do they update it every week? Update yours twice a week, or even more, if you can. If you don’t take this advice, someone else might, and then they’ll blow YOU out of the water.

So, like I said, contemplate this, do your homework, and research what you need to do, and then go into personal development mode. Find out how much you can do and how much you’re able to push yourself. Not saying to be unhealthy about it, but what I AM saying is to try as hard as you can.

Also, one other piece of advice: consider short term gains vs. long term gains. Do you want to feel good NOW, for something minor? Or, do you want to work hard, consistently, and find a much greater reward LATER? That’s a whole other topic I could discuss, and I don’t want to drop any more information into this article, as it might convolute the main point I’m trying to make. So, again, just to re-re-reiterate: work past the point of your competitor’s laziness. It’s a great tactic, and if you do it, you WILL see results.

4 comments on “The Best Tip For Staying Beyond Your Competition”