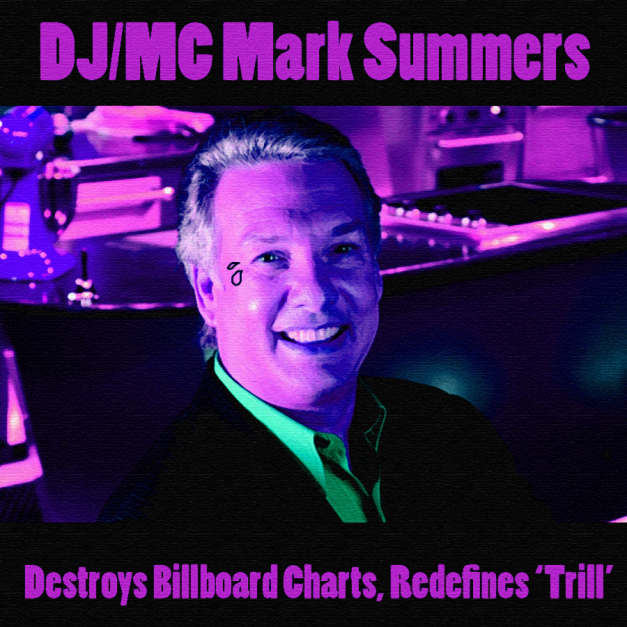 I didn’t believe it either. I was like, “no, that’s stupid, that’s nonsense.” But…then I heard the tracks, and I was like, “Oh, my goodness.. Maybe that guy from Double Dare DID make some bizarrely-awesome glitch hop tunes and somehow take over the Billboard Charts.

And when I say, ‘take over’ the Billboard Charts, I mean he has two songs in the top ten – “I Double Dare You to Bass,” and, “Butts, Butts, Butts!” (which features a LOT of Scarlett Johanson… (like, A LOT of her…..)

Don’t believe me? Fine, nonbeliever, click here and see for yourself: here.

DJ/MC Mark Summers – as in – yes, he raps AND DJs – has had a lot to say about his newfound success in the music world, and is ambivalent about the fact that he now has more groupies than ten Van Halens, saying, “I don’t gives no fucks, why the shit should I? I’m all ’bout that fuckin paper. Hell, maybe I’ll be the muh’fugga to bring the word HOLLA back. Watchu think?”

Well, DJ/MC Mark Summers, if anyone can do it, it’s probably you.

His new gangsta glitch hop track, “Swangin’ Tang,” is really something, rhythmically. It starts as a dodgy-sounding trap beat, but then unfolds into some kind of insane, swung-out, wonky (but professional-sounding) glitch hop gem of a jam – catchy as hell, and haunting. Just haunting.

“Yea, you know, I’m all bout that shit. I told yah bitches I ran that fuckin’ trap into the ground. I ended that shit,” Mark said. “Now it’s all bout the Mark Summer shit, ya knowadamean? Chains, booty, bass, and maybe some LSD, if there’s time, I don’t know.. We’ll see.”

Despite his straight to the point verbosity, Mark Summer’s music is anything but blunt – it’s actually some of the most complex, layered music that has ever touched the Billboard Charts, sans the Beatles.

“Swangin’ Tang” premeired on Youtube about two weeks ago, and was promptly taken offline twenty minutes later, despite the fact that it had almost one hundred MILLION views in that time – a world record, to say the least. But, the video was a little… risque for Youtube…

“It made the Dallas 500 look like fuckin Church!” Mark Summers chimed in.

Lil Wayne reportedly tried to contact him to go on tour, but Mark turned him down immediately, saying, “Wayne? That bitch fell off years ago, I ain’t touring with no punk ass.” A statement that would, ordinarily, ignite a vicious beef in the rap world, but Lil Wayne accepted it at once, saying, “I understand, mothafucka redefined ‘trill,’ by mistake, I can’t fuck with that, and I accept this.”

Mark Summers Mania is a phenomenon that has sprung up, literally, over the course of two or three weeks. He defies all conventional formulas for success, and he intends to keep it that way.

“Yeee-uuuhhh, Son. You know what I’m bout! I keeps it wonky for life, Son,” Summers said, in an interview with TIME, “I’m all bout that fuckin’ paper. Billboards is my new home, I moved in, and I ain’t fuckin’ leaving, you heard me? Now get out of my goddamn house.”

Many don’t believe it when they first hear it.. So, here is another one of my sources to check out.