What the Fuck is FUTURE SCREW? ((Yes! Free Mixtapes from Trill Scott Heron and 8oh8

Trill Scott Heron has been blowing shit on fire for awhile now with his blend of ultra purple “future screw” material. But what the fuck is future screw? Well, do you know what chopped n screwed music is? It’s basically that, but, uh… more future’d out…

Over two decades ago, DJ Screw, a Houston hip hop DJ, slowed down the hip hop – waaay down – and then chopped it, adding a faux-stutter to parts of the song. Then, he would phase it out while occasionally spicing up the intro or outro with his own vocal toasting on top. It’s a fun remix style. And, like many styles of music, there is a strong drug connection to it; in this case, it’s called syrup. You don’t HAVE to be on syrup to enjoy the music, that’s for sure – but the slowed down and phasey quasi-psychedelic nature of the music goes well with codein and sprite.

Anyway, what the fuck is future screw?

There are definitely different variations of it, but some of the most notable strains seem to include the same slooooowed-down aesthetics that you would expect from a screw (or skrew) track (using modern hip hop / trap beats as the primary source of remixed material) but in addition, those dutch house synths that were made popular in moombah (and trap) are added, as well (slowed down considerably). The result? Bing, bang! You got future screw!!

So, how the fuck is Trill Scott Heron, why does his name sound familiar, and what is this new mixtape of his?

Ok, seriously, stop swearing at me, and I’ll tell you!

Gil Scott Heron was a vocalist from the 60s and 70s (and actually had a comeback recently) who is best known for his civil-rights-era politically poetic vocals and beautiful jazzy instrumental music, with songs such as “The Revolution Will Not be Televised,” and “Winter in America.” Trill Scott Heron is most likely a play on Gil’s name, just as Philip D. Kick is a play on Philip K. Dick, Diles Mavis as a play on Miles Davis, etc.

Trill Scott Heron is a fucking champion, though! He’s been prolifically future screwing the fuck outta music lately, and I thought his new mixtape (which I’m listening to for the third time, now) deserved a mention on Bassadelic. So, the mixtape is presented by Trill Scott and trapstyle.com, it’s called, ‘Future Screw 3,’ and it’s available here, or you can listen below:

Gimme more future screw, I’m addicted. Or allergic. Or something, but I’m having a strong reaction to it!

Ah, no problem!! There’s “STYLSS SUICIDE PACT : T H R E E – Future Screw Mixtape Hosted by 8oh8 of ȘƱƁx₡ῌɌØИῗϾ.” (FULL DISCLOSURE: I’m not gonna lie, I copied and pasted that entire name. I have no idea where all those letters and doodles are on the character map, and I’m too lazy to go lookin… Anywhoooo….) ȘƱƁx₡ῌɌØИῗϾ is dope, and 8oh8 shows definite capability in the purple department. The mixtape is very enjoyable and chill, and I recommend a good ol’ fashioned listen! 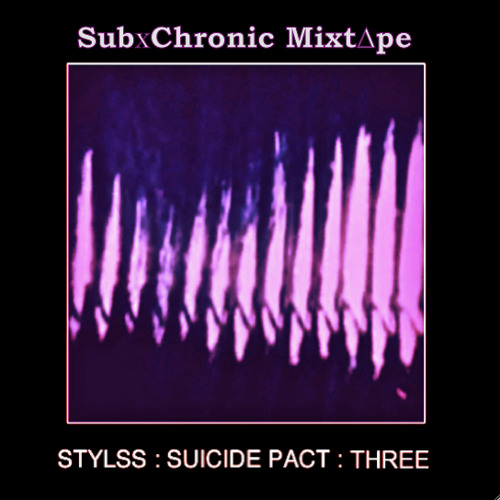